The Most Famous ATM Robberies Over The Last 10 Years 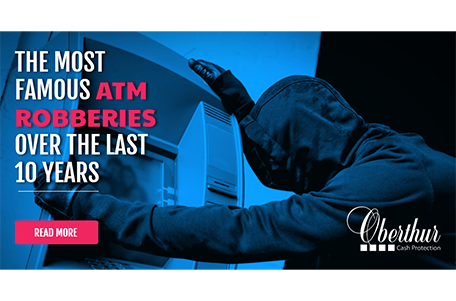 Pulling off a successful heist is not as easy as it seems. However, despite all the efforts made by ATM deployers both Independent and Banks, as well as the Cash in Transit companies to prevent attacks there have been some notable success in the last few years.

This article will look at some of the most famous ATM and CiT robberies over the last decade and consider what lessons can be learnt from them.

Baltimore : A Series of Physical ATM attacks in 2020

This series of robberies focused on small freestanding ATMs inside small retail businesses. These locations had a variety of security measures designed not only to protect the ATM but also the members of staff, stock in the shop etc.

The growth in the deployment of surveillance cameras will help the police secure convictions along with the use of ink staining that enables law enforcement agencies to link the stained notes to a specific ATM robbery.

Baltimore Police have been distribution flyers like this to businesses with ATMs. Telling owners to invest in alarm systems,GPS trackers and dye packs for the devices. (WBFF). 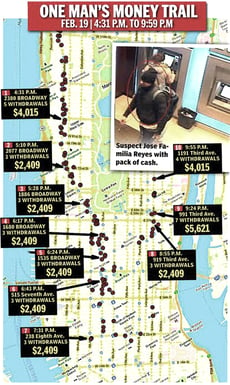 In just a matter of hours, $45 million was stolen from thousands of ATMs across New York.

Starting February 19, robbers made ATM withdrawals at over 2,904 machines. Thieves were able to accumulate $2.4 million marking history for an ATM robbery.

This attack happened in New York City. Several experienced computer experts and street criminals were involved to ‘empty’ the ATMs. The computer experts knowledgeable in hacking techniques and manipulating data enabled them to compromise the security systems in place.

This robbery is one of the largest ever executed f in New York City, matching the 1978 Lufthansa heist, which inspired the movie Goodfellas.

In September 2012, robbers executed one of the biggest daylight CiT robberies in Delhi, India. Armed men stole Rs 5.25 crore, equivalent to about $700,000 USD, from an armored vehicle transporting with ATM cash from the local Defence Colony.

The criminals intercepted the armored vehicle filled with ATM cash for the Defence Colony.. The criminals overcame the four security guards at gunpoint and then fired at one of them who was refusing to obey their instructions to allow the cash to be moved. Later that same day, the police arrested all the robbers..

Successful ATM attacks show up failures in the ATM and bank protection systems. It is therefore important that banks and other ATM deployers and companies that provide ATM security solutions must work closely together to defy the criminals.

Discover now : How To Future Proof Your ATM Network from physical Attacks !