How can You Protect Your ATM from Explosive Attacks? 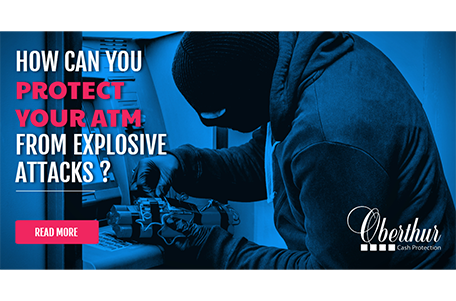 While criminals look to new and even more inventive ways to attack ATMs such as jackpotting, cash-out, the frequency of traditional physical attacks continues to grow.

The first explosive ATM attacks using gas and solid explosives were seen in 2005 but have recently become one of the most noticeable of global trends.

This article explores what is involved with explosive attacks such as the collateral damage together with the measures that can be put in place to deter attacks.

Explosive attacks are perhaps the extreme form of ATM robbery as there is the potential for harm to members of the public and buildings as explosives are used to gain entry by blowing off the vault door. Unfortunately, as vaults become stronger there is a corresponding increase in the quantity of explosives being used, thereby increasing the risk.

Unlike the traditional office safe, all ATM vaults have apertures to allow access for power cables, banknotes to be deposited or dispensed etc.

It is through these holes in the vault that the criminal will insert the explosive; usually via the cash presentation aperture,

The usual criminal’s methodology is to prevent the note presenter mechanism from closing the door, this then allows for gas to be inserted into the vault via a pipe that is fed through the now open mouth of the presenter. Alternatively with solid explosives this can be achieved through the same aperture using a tool for obvious reasons known as a pizza ‘paddle’ or, ‘shovel’ to place the explosives in the ATM.

The consequence of an explosive attack is that the ATM is nearly always severely damaged and frequently destroyed. There is inevitably collateral damage to buildings and regrettably putting innocent passers-by at great physical risk of harm, especially when excessive quantities of explosives are used. There is also a significant negative impact on customer confidence, local residents, neighbouring retailers and bank staff etc.

Both solid and gas explosives are used in ATM attacks.

The most commonly used solid explosives will vary by country but examples include dynamite, gelignite, plastics - C4, and emulsion explosives such as power gel.

In many countries, criminals are able to source these explosives from mining and demolition industries. Therefore, it may come as no surprise that countries with well-established mining industries, such as South Africa, Brazil, are experiencing a high number of explosive ATM attacks. 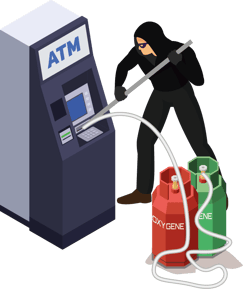 On the other hand, most explosive gas attacks utilize Oxy Acetylene or similar that are generally found across many industries.

It can be seen from above that sourcing solid explosives is generally more difficult than gas. Experience shows that gas explosives are easier to insert into the ATM and can be detonated in a variety of ways, including a simple gas cooker type igniter that generates a flame or spark.

In Europe, explosive attacks were first seen in Italy and The Netherlands and predominantly involved gas. However, more recently there is an increasing number of solid explosive ATM attacks e.g. in Italy where gas attacks were in the vast majority have a ratio of 30% gas v 70% solid explosives, with C4 as the most commonly used.

The suggested Oberthur Cash Protection methodology is to use a layered approach of different security measures that are appropriate to the type of attack that is anticipated. It can start with the use of armoured CiT vehicles to deliver the cash, then it looks to include security methods to prevent card skimming attacks, cash trapping, card trapping etc.

These layers start with the choice of the ATM location, the selection of safe such as CEN3 rather than CEN 1.

Looking specifically at the layers associated with preventing explosive attacks the key is the installation of an Intelligent Banknote Neutralisation System, IBNS. This will mean that criminals will not attack the ATM as they know with the Oberthur Cash Protection system that the banknotes will be rendered valueless by indelible ink and so the reward is not worth the risk.

Another layer to be considered is to make it exceedingly difficult to gain access to the ATM vault to insert the explosives such as with a Double Shutter Cassette System.

Other security layer measures can be sirens that activate once the ATM is being attacked, fascia protection that shuts down the ATM if an attack is being mounted on the fascia.

The key proposition with IBNS is that it protects banknotes by removing their value and rendering them unusable if the ATM is attacked. Banknotes are indelibly stained with a conspicuous bright coloured ink, thereby marking them as stolen. 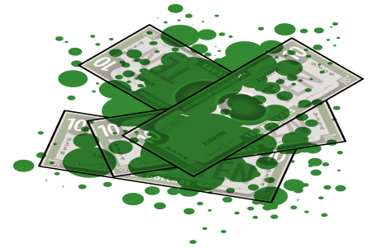 Unlike dye, packs when used in cassettes these systems do not decrease the note capacity of the cassette.

IBNS utilizes the inbuilt intelligence of the system to recognize when the ATM is being attacked such as by ram raid, hook and chain or explosives and then automatically activate, indelibly marking the banknotes.

These IBNS systems such as OCP’s ICSD need to meet a range of country standards such as for France. OCP’s system achieves the requirement of 100% banknotes to be stained to a minimum of 20% of the note surface.

Criminals realize that the reward from stealing these neutralized notes is not worth the risk of attacking the ATM especially as the ink can contain trace elements so that automatic note readers will reject the notes and even more so, as it will link a stained note to a specific ATM, so helping to secure a conviction.

This security system is positioned in the cash transport area between the shutter and the safe opening. 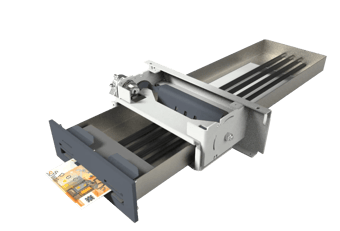 The device is synchronized to the ATM’s shutter and in case of illegal opening, jamming open or breaking of the presenter shutter, the guillotine blade in the Double Shutter remains locked in its closed position. The entire device is non-removable, non-extractable as it is securely anchored to the ATM vault.

Explosive attacks are increasing around the world. To protect your ATMs from these attacks a layered protection approach should be adopted with systems such as OCP’s intelligent Banknote Neutralization Systems at its heart.

ATM owners need to be proactive in selecting the right security measures to meet the foreseen threats.

Oberthur Cash Protection are the ideal partner as they offer solutions to meet both logical and physical attacks both now and with ongoing development into the future.